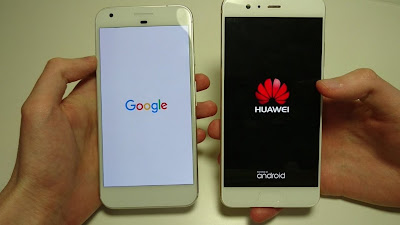 A few days after President Trump has placed Huawei on a blacklist, Silicon Valley is taking the first steps. And it is Google that pulls first with, according to Reuters, the implementation of a blocking features related to Android and Play Store. According to the news agency, Huawei will lose access to system updates signed by Google and will be banned from shipping the Play Store and Google apps (Gmail, Maps, etc.) to future ones.

Still according to Reuters, internal discussions at Google are underway to refine the details of the restrictions – for example, questions about updates and access to Google services for existing devices. For its part, Huawei would have put his legal service on the fight to counter the decision of Google – and the US State Department – in US courts.
Android is partly open-source, Huawei can still tap into the common core of the operating system … But according to Reuters, Google also stop providing technical service to Huawei. A decision that could condemn Huawei, in the medium term, outside its national territory. And that would be a problem for its customers, including France, since they could not take advantage of new versions of Google software.
Commercial War and Potential Spying
Google’s blow to Huawei is caused by the executive order of US President Donald Trump to put the Chinese firm on a blacklist of companies with which US companies are prohibited from sharing their technologies. A decision that intervenes in full hardening of the trade war that is being fought by the US and China, with great blows of billions of customs taxes.
The hitch for Huawei is that the Chinese technology flagship – world leader in 4G and 5G equipment, the world’s No. 2 smartphone, designer of its own SoC (read more), giants also designing PCs and tablets, etc. . – is not a neutral company. Very linked to the Chinese Communist Party (CCP), the firm has benefited from the largesse and support of the Chinese government (as many American technology companies from their own government, it should be noted). A proximity that not only partly explains the success of Huawei, but raises, for Americans as for many Western countries, many questions in the neutrality of equipment. Huawei is often suspected of introducing backdoors into its equipment.
In addition to Huawei’s “risk” as a potentially “patriotic” company, it is also important to understand that Huawei is scary because the company is in control of the entire chain of what should become the backbone of telecoms – 5G, antennas to terminals. And especially because his mastery is great. And that his products are good.
Is Huawei well enough prepared?
If Google’s decision is brutal, Huawei has been preparing for this event for a long time. The company anticipates a blockage of Android since 2012 and has developed an alternative OS – which no one has seen yet. With one of the largest R & D budgets in the world at its disposal, the brand in the flower also ensures hardware: with Apple and Samsung, Huawei is the only manufacturer to master the design of its SoC (system on a chip) , this chip to do everything that is at the heart of all smartphones – the Kirin developed by its subsidiary HiSilicon. Working hard for years, Huawei is developing high quality products like the P30 Pro or Matebook X Pro, which are starting to shake even Apple.
Although very prepared, the brand could suffer a lot, including the material side. If it controls the development of its ARM processor, it depends on one side of Taiwanese factories (TSMC) for the production of chips, and patents and US technologies for process and marketing outside China (patents, etc.). ) on the other, as recalled by Reuters in a second article. All this against the backdrop of tensions with Taiwan, a leading country of etching technology and a friend of the USA, on which Beijing has been intensifying the pressure since the election of Tsai Ing-wen in 2016. And with the memory factory precedent Fujian Jinhua Integrated Circuit that the Trump administration killed last year, thus burying for a moment China’s ambitions in the segments of DRAM and NAND memory.
We should know more in the coming days as to the details of the blocking of Google against Huawei. But one thing is certain: the economic war between the US and China has just passed a new level, which may have significant consequences beyond even the sector of new technologies …
GoogleHuawei
Share FacebookTwitterWhatsAppReddItPinterestTelegramEmail

A closer look at the new Apple iPad Pro

Your bank details in danger! Be careful if you receive this SMS

Tips for saving your phone after falling into the water

This is the launch date for the iPhone fold